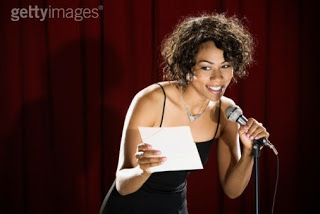 Tonight I’m headed to the Cafe to do a 3-5 minute inspirational presentation about relationships. I made an arrangement with the owner who says I can do a presentation every week during his Poetry and Speed Dating event. I’m so excited that I planned out the topics for the next 10 weeks.
But this week…chile…I’m still rolling my eyes about LAST week. You won’t believe what happened…
So last week was my second week doing a presentation at the Cafe. The first week’s presentation went well, I spoke about gender roles and challenged the audience to BE THEMSELVES, regardless of what society tells them they need to be based on their gender.
Just before I got on stage last week, the place was empty. Then a few people started trickling in and one guy started buying drinks for everyone so I put my order in too. He asked me if I wanted to leave and go have dinner with him and I said No. ~raises eyebrow~ Who the fuck is you?
I finished one drink and was on my 2nd one when a guy in the audience asked, “Can someone Do SOMETHING? I didn’t drive all the way up here for nothing.”
The hosts looked at each other like, “I ain’t going up there.”
Since no one wanted to step up and do anything I said, “Well, I’ll go.” And then I walked to the mic to begin speaking.
I spoke about break-ups and why they are so difficult to get past and how to work through them. I promised everyone there that they WILL feel that attraction again and to not hold on to a bad thing just because they have a few good memories.
For some reason, both times I presented my mini speeches, the owner of the Cafe missed it because he was standing outside. Last week, he walked in just a minute before I was done and he asked, “Did I just miss it again?”

I nodded my head. What was I supposed to do? I get on the stage when the hosts ask me to.

“You have to go do something else,” he said.
Although a bit tipsy, I shrugged my shoulders and went back to the mic. Because I had not prepared anything and there were less than 10 people there I said, “This is a new theory I’m developing and I don’t mind if you guys give me feedback on it. I haven’t really figured it all out yet, but I’ll share it with you anyway.”
Then I explained how I was thinking that the whole boyfriend/girlfriend thing was a fake ass commitment and why do men try to label you their girlfriend anyway. Is it because they don’t want any other men to meet you and possibly outshine them? What are men so afraid of? Why the label? Boyfriend/girlfriend is not really a commitment and I don’t care to be a part of that fallacy.
This raised eyebrows all around the cafe as people started raising their hands to question me.
The guy who tried to take me out to eat started questioning me too and just like everyone else who asked questions or made comments, I replied to his questions…but he wouldn’t stop. He kept making it personal- all about ME. Asking questions that a guy would ask on a date. In hindsight, I should have just said, “If you want to take me out, ask me in private.” But I’m open and I honestly didn’t mind explaining how I felt about relationships.
You could hear gasps all around when the guy asked, “What DON’T you want in a man?”
“I don’t want a man who has a JOB. I’m not interested in anyone who gets a paycheck by clocking in. That’s not success to me. I don’t want anyone who is religious. Not into that at all. I’m not even interested in the whole marriage thing. Marriage is a socially constructed concept and if a man wants to marry me he is going to have to convince me that it’s a good idea..otherwise, we’ll just be good friends.”
People got offended.
“What about the BIBLE?”
I put up my hand, palm facing the audience and I shook my head. “Don’t go there,” I said firmly.
One woman was so offended that she walked out. The guy kept asking question after question until I was exhausted. Eventually he told me that I would probably end up an old lady alone with a cat and a dog and I told him that if that happened, I was fine with that.
It was a very personal conversation that occurred in a public place and I could tell that people were looking at me funny after that. I didn’t mind. I don’t mean to offend. But if you ASK me what I think, I’m gonna tell you.
So the presentation got way out of hand thanks to my oppenness and the guy’s annoying personality. Later, when i asked the owner what he thought of the presentation he said that I should not have allowed the audience member to control the conversation in that way. His lead hostess told me that she would change the line up of my presentation so that it doesn’t lend time to people to discuss so openly which will take away from the LOVE vibe of the evening.
I didn’t mind.
So tonight I’m going to talk about narrative therapy and the stories we create surrounding our relationships and how those stories come true. I’m going to teach how to change the story, if it’s a negative one which will ultimately change your outcome.
I invited some friends to come and hear me speak and I’m looking forward to seeing them.
Let’s hope this week’s presentation goes better than last week’s. It feels so great to be able to practice my speaking in a cool environment.
Cross your fingers for me! I’m about to go get dressed right now.