Skip to content
Ahh…
What have I been up to?
Procrastinating.
Seriously. I find a million reasons to put off doing my last papers and studying for my final which is Wednesday. I HATE when people tell me the real due date for something because I literally can not work on it until the day before its due. That sucks.
Really it does.
So I’ve been looking forward to Tuesday, tomorrow. Tomorrow’s gonna be crunch time for me. I’m gonna be working overtime to finish all of my assignments and I’ll do well too, cuz I work better under pressure.
Ohh..I did enjoy my boys this weekend. We cuddled and cuddled and talked. I showed them Second Life and they LOVE it! They played it more than I did! They had me on basketball courts in my stilettos shooting hoops, at the skate park, riding motorcycles and driving cars into the ocean. It was a lot of fun watching them play, ask questions and visit places that I’ve never been.
Although I use SL for social purposes, they are content to explore the castles and buildings and what not.
I did rent a home but after living in it for a week and it still looking so bare, I’m thinking I’m gonna go back to being homeless. Furniture shopping is annoying. But it sure is great to have a home to go to so that I can change clothes and hang out with my sister, who joined SL and promptly moved in with me. 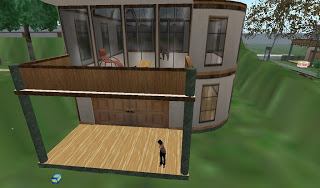 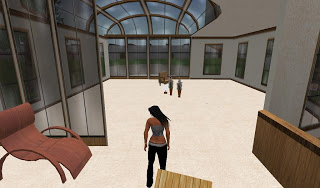 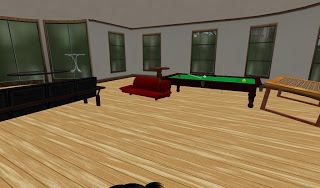 I also joined a group called 3rd.Life. The whole purpose of SL is social networking so it’s like a gigantic 3-D Facebook. You join groups and that group holds an event and you “go” and you meet others like yourself. So, I joined that group and the purpose of that group is to discuss how SL affects your first life. Yeah..pretty much a psychology group, but I love it.
They even have a blog where they post the “minutes” of the meetings. The last topic discussed was SL Drama. Most of it centering around relationships that people have.
Yes, people do meet and marry on SL. They have virtual weddings and everything. I mean..EVERYTHING…like wedding cakes, bachelorette parties and wedding parties all dolled up in matching outfits. It’s wild.
I took my sister out to a party and she was like, “Where are all the men?” after looking around the club filled with booty-short clad women vying for the 1000Linden prize for best body in shorts.
“Ya’ll gay” she typed so the whole room could read and then she teleported the hell out of there.
She went back to my house to try on some more eyelashes and stuff she picked out.
Ahhh…Second Life…. Lots of entertainment.
I think it would be so much fun if all of my friends joined SL instead of using that elementary school ass myspace. We could buy an island and build homes and live right next to each other. I think it would be cool.
I had a discussion today about marriage with one of the men I met on SL. My idea is that marriage was constructed as a social norm when religion came into popularity. He said I only think that way because I’m only exposed to Christianity and there are far more religions than that one. He even said that in other cultures like…was it Switzerland or Scotland??…marriage is viewed as more of a tradition that people are straying away from, instead of a social norm. But he says that this is because their society is more accepting of what our society calls deviant sexual behaviors like transgendered people and homosexuals.
I don’t know…to me marriage has become a legality. I think that you can honor someone with your love without signing a piece of paper. I also believe that the divorce does not happen when the divorce papers are signed, it happens when the two parties seperate emotionally and are not bonded to each other anymore.
A piece of paper means nothing to God, only the IRS and the insurance companies care about that. I told the guy, who is from North Africa, “If I ever find a good reason to be married, I will do it, but until then…love isn’t enough. We can be friends if all that we have is love. I am not pressed.”

My life is a miracle.

I woke up this morning, confused as hell.

This is the 4th night in a row that I have dreamt about my BBDD. No, these aren’t X-rated dreams, these are weird because in the dreams we are friends. In one of the dreams, he had both of his legs amputated and I was pushing him around in his wheelchair. In another we were leading a group of teens on a field trip out of town. In each of the dreams we’re working together.

And then…my heart lifted when I thought about my friend’s website. You guys have to check it out. It’s so amazing.

Do you get it?

So I’m confused because..he has a girlfriend…but this morning I was feeling so attracted to him. Seriously, I was in a ‘I’m so proud of him I would fuck him’ kind of mode.

Why does progress turn me on so much?

This feeling I have, I know it’s attraction and appreciation but it feels like love..which feels like fear. Do love and fear feel the same?

And when I think about attraction, I think of JB. Remember him?

He was the last man who was sorta my boyfriend…way back when. And it was kinda fun. And I enjoyed him. And he was so fine to me. And he was even skinnier than I am but I didn’t mind. But he also had some traits that I found to be undesireable..but I hung in there anyway because I thought he was wonderful. I guess he didn’t feel the same way about me.

Anyway… I’m scaring myself this morning because I have not given any thought to being in a relationship in a while. Maybe it’s this appreciation/attraction for my friend that’s doing it to me today. Or maybe I’m just infatuated with the idea of progress itself. Maybe I’m in love with progress and anyone who exhibits it, will become the object of my affection.

Or maybe I’m jealous. I have so many projects that I flitter and flutter between and none of them is REALLY consistent and polished. Maybe this feeling for my friend is jealousy mixed with admiration.

I don’t know… All I know is.. I wish this feeling will go away because it causes me to wonder if I’m missing something….